Welcome to the most unusual News about Buenos Aires! Here I will detail the News and curiosites I had been discovering are interesting to visitors like you. As a private tour guide in Buenos Aires I was collecting this curiosities and any time I find a relevant News you will find it here! Remember there will be always more curiosities, hidden places and local flavor you can discover with me in a private tour!

Mannequin Challenge in Buenos Aires, by colorful Regiment of Patricios

This Regiment was created in 1807 for resist the second british invasion of Buenos Aires, they had participated in all the wars, since the defense of Buenos Aires, the wars of Independence, the war against Brazil, the defense of the North East of the country when it was many times attacked by british and french, the wrong war against Paraguay and the war of recover of the Malvinas Argentinas islands.

This Regiment today has the function of preserve the integrity of the Major of Buenos Aires city.

The first members were volunteers called by the Buenos Aires Government to defend Buenos Aires against the british troops which had invaded Montevideo and were planning to invade (again) Buenos Aires. There were so many volunteers that they created the “"Legion of Patricios (Patrichs) Urban Volunteers of Buenos Aires" and reinforced many other Militiamen Groups.

After defeating by second time the british invaders, the Patricios become the most important political tool for sustain the political power in Buenos Aires and they decisive to state our first step in the search of Independence. The first free Government of Buenos Aires was leaded by the Commander of Patricios Regiment, Don Cornelio Saavedra, and the Act of that important May 25th of 1810 was written by a lieutenant of this prestigious Regiment.

Washing the face of the Obelisk

The Buenos Aires Obelisk is the icon of Buenos Aires and this year will reach 80 years of existence. As a first step on its restoration, they are hydrowashing it. One of the things they will need to clean are the infinite steps of Greenpeace who climbed it again in defence of the appliance of the Glaciars Law (which sets protection about mining beside glaciars). This hydrowashing and the Greenpeace intervention are not the only curiosities about this beloved-&-hated monument. It was dressed with a condom in support of campaign to prevent aids, the Boca Juniors fans do celebrations there, it had some creepy advertising around it base in the 70's, it has the Guinness record of highest dance of Tango and more things I can tell you personally. Meanwhile you can see pics of the washers and the activists: 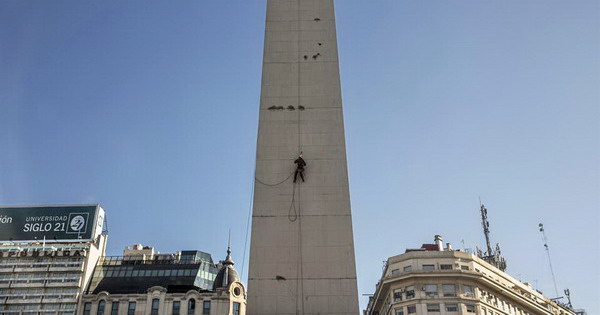 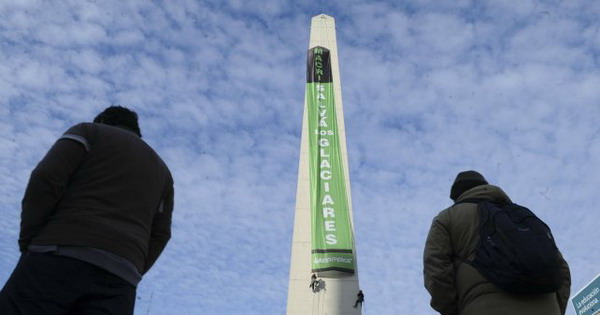